I’m not the kind of guy that really just gets a kick out of sitting for hours in a tree stand waiting for my buck.  It’s more of my nature to try and make things happen.  But, in the thick brush of the Southeast, most of the time that is the only and best option.  There is nowhere on Planet Earth where you can “make it happen” like West Texas.  This is where rattling for whitetails was invented, buck-to-doe ratios are 1:1, and the bucks are mean and ready to battle. 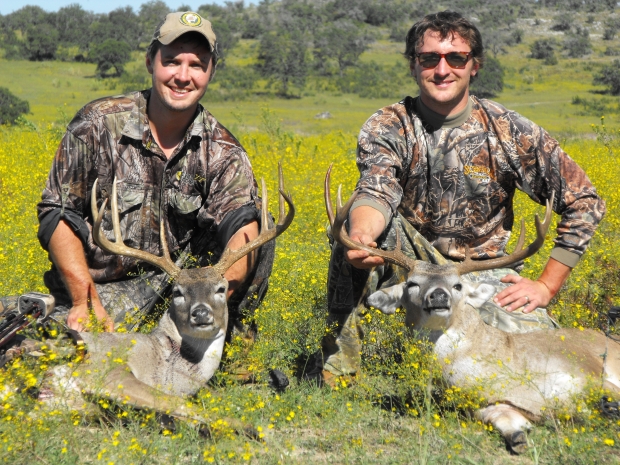 Last bow season was a pivotal time in my life as a bow hunter.  I already had a Pope and Young under my belt and, I was serious about killing only mature whitetail.  After reading an article written by Michael Waddell, the man’s man of the hunting world, I decided to buy and hunt with a Bone Collector combo snort-wheeze/ grunt call.  I also decided to bring two left side sheds with me to hunt just South of Marble Falls, Texas.  I had done my fair share of rattling in Louisiana and Arkansas but, had never seen a deer respond.  I’m sure I had a few curious bucks check me out but, with the limited visibility of the Southeast, I never saw ‘em.   Texas was different altogether and, I was determined to give it a shot.

Walking to my stand on the opening day of Bow Season 2012, I walked right up on a pair of 2 ½ year old bucks duking it out.  In the predawn moonlight, I could see the two silhouettes pushing one another back and forth.  Even at 30 yards, what surprised me was the lack of noise the two were making.  There wasn’t the crack and rattle, crack and rattle that I had seen hunters on TV doing.  It was just a shoving match.  The sound coming from the battle was primarily brush busting and stomping of hooves and, in the drought stricken soil, the hooves could be heard above all else.  The sounds created by the joining of hard bone were a click-click of tine base against tine base as each brute turned their head while pushing.  This event completely changed how I approached calling whitetails.  Just like the first wild hen turkey I heard calling in the Louisiana bottoms, I now had firsthand experience.

Texas is a hell of a place!!

A few hours later, I tried my first snort-wheeze of my bow hunting career.  Not expecting much in the way of results, I went back to the monotony of watching out the window of my Double Bull blind.  Less than five minutes had passed and I heard what sounded like a big fox squirrel jumping from tree to tree behind me.  This is a sound that I now listen for when calling for Texas bucks.  I turned around to see a nice 2 ½ year old buck with his head thrashing in an overhanging live oak branch.  The sight was as beautiful as any I had seen in the woods.  I had called this buck into hunting range.  Even though that was what I was attempting to do, I was still surprised.   After another hour of dull blind sitting, I decided to “make something happen.” I was dying to try calling some bucks.

I knew enough to play the wind and, quickly devised a plan to utilize the slight west wind we had that day.  I was near the South property line and about a half-mile from the west border of the West Ranch.  The West Ranch was owned by a telecom mogul and was not hunted hard to say the least.  I knew that there were huge bucks on that property and, decided I would troll the line with the wind in my face.  I made a couple of sets before making it to the west border and had a decent 8-point respond, ready to fight, each time.   This instantly became my new favorite hunting.  Up until that point in my life, the action that turkey hunting provided was at the top of the list.  That was no more the case.  There is a lot of excitement and serious adrenaline dump that comes from the fact that a 150 pound wild animal with a head full of sharp points is charging into demolish whatever happens to be making all that noise.  And, when you are eye level with that kind of muscle, it is straight up exhilarating.

Finally on our border with the West Ranch, I found the perfect location for a set and started my sequence.  I began with a few grunts and after a short pause gave out my best snort-wheeze. Schh-ch-chhhhhhhhhhh.   30 seconds later, I picked up the two sheds to rattle a bit when only 40 yards away a branch of a large live oak began to shake.  I had heard that sound only hours before and knew there was a buck standing under that shaking limb.  As I watched intently for the buck to come into view, something caught my eye about 20 yards to the right of the shaking limb.  It was a hoss of a buck- huge body (for Texas) dark chocolate antlers sporting very tall tines- standing on the edge of the fence looking for the buck that had invaded his territory.  About that time, the buck that had been raking the tree, a 150 inch identical twin to the one I was watching, jumped the fence and landed 30 yards from me.  I attached the release to my string as the buck headed stiff-legged hair-raised right at me.  Luckily when he got to about 20 yards he turned slightly and came perfectly broadside.  Unfortunately, my arrow struck a little brush and the arrow hit the dirt between the buck’s feet.

We are going to have fun in Texas one way or another.

I rattled/ snort-wheezed eight bucks into bow range that day and, established a model that I will follow for the rest of my life.  It is just too much damn fun!!

Two weeks later on a cool October Saturday, I rattled up a wide 137 inch buck and put a G5 through his heart.  Less than an hour later, I rattled up another Pope & Young for my buddy Matt.   Being a lights-out killer, he sealed the deal.   Less than a week later I handed my calls and rattling horns to my father along with a blueprint for success as he headed out to Texas.  Early Sunday morning, he struck antlers together and minutes later had a 160” 8-point broadside at 20 yards.  The plan had worked.  Now I am writing this article simply to release the tension that has been building since that day.  The Texas bow season is almost upon us and I can guarantee you that I will not be wasting my days cooped up in a dark blind. In other related news- I’ve got a Dave Smith buck decoy ordered and on the way and, can’t wait to see what kind of excitement that will add to the mix.  This stuff is fun, y’all!!!  Get out there and Make Something Happen.

Matt with his Texas Pope & Young 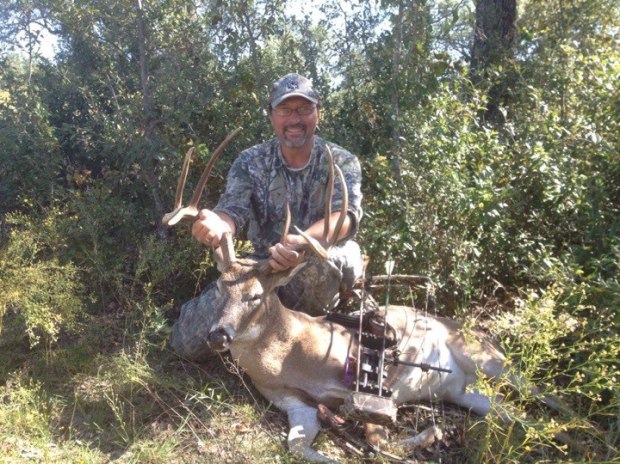 ← Deep Sea Rodeo
Bobcat in a Suitcase by A. Dewitt Day →