For most people, every year bow hunting conjures up images of crisp, cool forests and chilly evenings swaying in the breeze at the top of a tree in a lock-on stand.  Everywhere except for Texas. In Texas it conjures up images of mosquito spray, Gatorade, and heat waves.  By the end of the 2012 bow only season in the Texas Hill Country, the daily high temperature was still topping 90 degrees. Not the best weather to suit up in Scent Lock and hiking boots.

Jessica with her first bow kill after only a single hunt and single shot bow hunting.

After moving to Houston, I had trouble finding time to go bow hunting, mainly because I was planning my wedding, starting a new job, and trying to start a new life.  Back in Louisiana, all I needed to go bow hunting was a quick 30 minute trip from door to tree stand.  Moving to the big city made finding the time to hunt and a location much more difficult, and neighbors really frown on target practice in the front lawn.  My dad and I finally found some time to go hunting on our lease near Marble Falls, TX the second-to-last weekend of bow season. 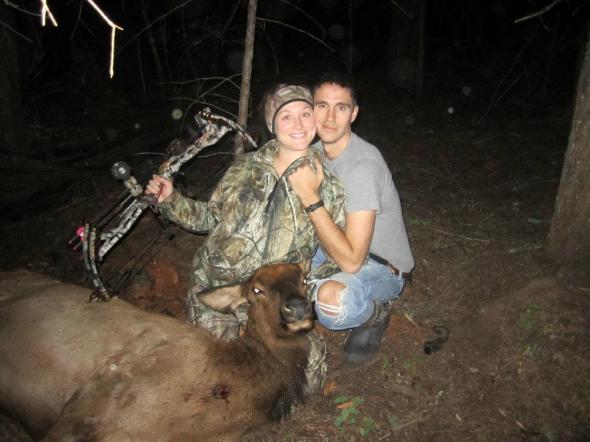 I was exhausted from all the pre- and post-wedding frenzy, so I had practically zero bow target practice under my belt for the season.  I went in to this last-minute hunt nervous, frenzied, and unprepared.  My dad likes to hunt with me and he had selected a ground blind for our hunt.  His role was to advise me on which deer to shoot – he assured me I would have my choice of awesome deer, which was a foreign concept to me since I call our deer lease in Louisiana the “deer less” – and video the hunt.

The ground blind was on top of a hill, so after a short hike in the dark we settled into our stools in the blind.  We were about 45 minutes ahead of sunrise so we enjoyed the pre-dawn noises and mentally prepared.  While it was still dark a deer walked in to our field of view about 15 yards in front of the blind, feeding on the corn we had set out the night before.  We couldn’t tell in the dark whether it was a doe, small buck, or trophy.  Right as the light was good enough to tell it was a very decent 10 point, the deer turned broadside about 20 yards away.  Easy shot, considering I had taken down much harder kills at much further distances.  Confident, I pulled back my bow and waited for the instant, easy death.  I heard a twang and the buck bounded a few yards away, unscathed.  Beside myself, we tried to figure out what went wrong.  Obviously, I had screwed up big time to miss such an easy kill.

In the few years I had bow hunted in Louisiana, I had never seen a deer that big even during gun season.  To miss such a kill to me was a once-in-a-few-hunting seasons’ chance.  I was sick to my stomach but my dad felt confident I would get a second chance.  He advised me to settle down and be sure I was properly sighting my bow and going through the usual paces of a good shot.

Within 20 minutes, another 10 point, a little smaller body size than the first, walked up!  I couldn’t believe I had been given a second chance!  God was smiling on me! As soon as the deer was within range and broadside, I masterfully let an arrow go.  Twang!! The deer bounded away again, totally whole and a little confused.  Stunned and really crying (quietly) now, my dad pointed out some small branches directly in front of the deer that my arrow hit and misdirected.

Jessica with her first rack buck.

Totally hopeless, I could not believe that I had missed two of the biggest deer I had ever seen in one morning.  But, unbelievably, another buck walked up about 45 minutes after my (latest) miss.  This deer was a 9 point with a great body size. One hundred percent determined to nail this buck, as soon as he was in range I breathed deeply and fired an arrow. Yes! Finally hit the deer in what looked like a perfect kill-zone shot.

After a victory dance, watching the video about one thousand times, and waiting the obligatory one hour, we set off to find the kill.  Remember, the sun is now climbing high in the sky and the temperature is not far behind it.  In our Scent Lock suits we started to sweat and overheat in a matter of minutes, while following a sporadic and tiny blood trail down the side of the rocky hill.

After two hours of following an increasingly minuscule trail of blood droplets, we decided we really needed to take a break, have lunch, and cool off.  Not to mention recruit my mom, who was waiting for us at the hotel, to come look for my deer.

Every bow hunter knows that even after a hard hit, the chances are relatively high that you might not ever find the deer, depending on the location of the arrow entry.  I felt very confident I had made an excellent shot, so I was very discouraged that we were having such a hard time finding the deer.  So after lunch, mom, dad, and I trekked back out to the lease determined not to waste my third-chance buck.

At this point, we were about a half a mile or so from the ground blind, spread out in different directions searching every clump of brush.  Shortly after returning from lunch I found my arrow lying on the banks of a small pond.  The arrow was totally intact but without the broadhead.  What did that mean? How had the broadhead fallen out and where was the deer? I didn’t think it was a very good sign. 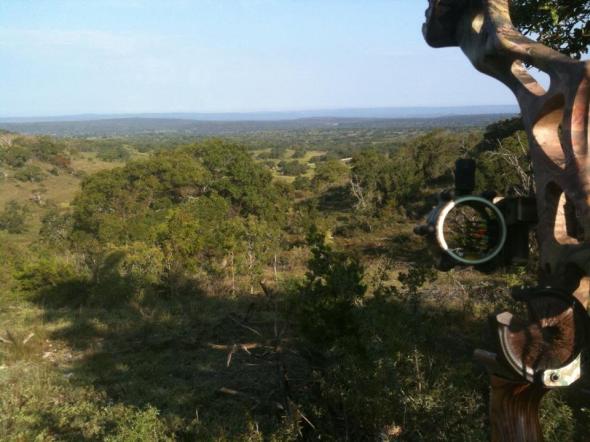 We searched another few hours in the vicinity of the pond, and, near the point of total exhaustion, decided to extend our stay in Marble Falls and continue our hunt the next day.  The meat was totally worthless by now, broiling in the ridiculous Texas fall sun.  My sweet brother had already loaded up his dog and was headed to Marble Falls to help us look the next day!

In preparation to leave, I pulled my car around to the side of the pond from my original parking spot nearer to the ground blind.  I pulled directly alongside the back of the pond, and started honking the horn to signal to mom and dad that I was ready to go.  I couldn’t see anyone in sight so I got of the car and started walking around the pond again to have one last look.  I still couldn’t see anyone, but I heard my mom start shrieking.  Thinking she had come across a rattle snake, I started to run in her direction.  She was standing in some tall grass just feet away from my parked car and about 25 yards from the pond.  I could clearly see, the closer I came, that there were a pair of antlers sticking up through the grass.  She had found the deer! 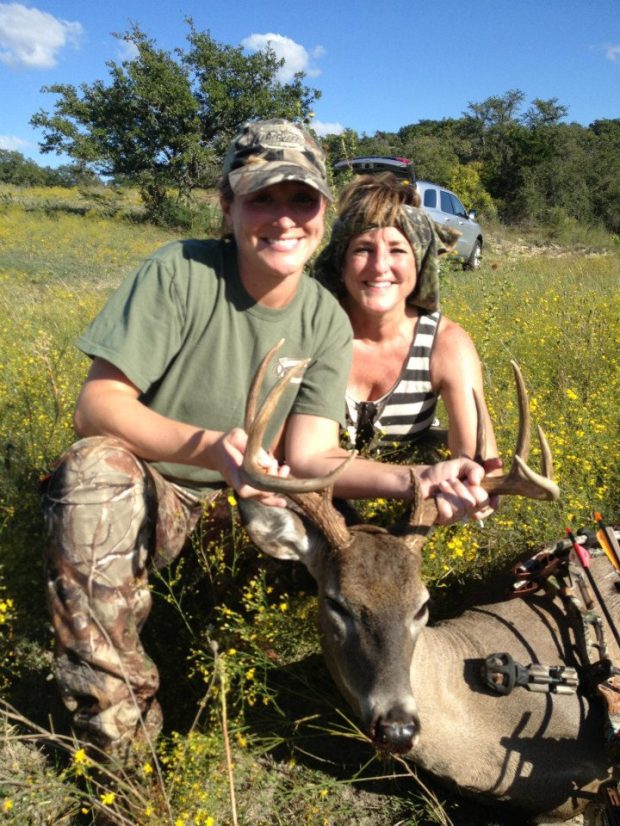 Jessica and mom, Martha, after finding the deer. Notice how close the car was parked from where they found the deer.

Mom had originally walked in that direction because she spotted some turtle shells she admired, although what she planned to use them for I can’t tell you.  The grass didn’t look tall enough to conceal a full grown deer’s body so we didn’t bother to look through the grass earlier.  The buck was mere feet away from my parked car and we had been tromping all around the area, criss-crossing paths to and from the pond and missing the buck each time!

Jessica posing with her first P&Y buck killed with her deadly Alpine bow.

It was a long, hard, hot hunt, but working together to find the deer is one of my favorite memories.  It’s one of those hunts that reminds you that bow hunting is hard, it’s not for the faint of heart, and you definitely need the help of friends and family to keep you going.  All in all, it was totally worth it and I cannot wait for the next hunt.  Hopefully this time, I will have a little more time to practice. 🙂

Jessica and her Dad, Albert.

One thought on “Third Chance Buck”