When the warm south wind starts whispering across the south Louisiana coast there’s only one place that can fill the soul of this man. It’s a place like no other on earth. An abyssal wilderness filled with hope and desire, passion and adrenaline, life and death. A place where a mighty river dumps nutrients into a bottomless canyon filled with toothed monsters awaiting battle. The battle’s beginning is where the muddy waters of the marsh meet the open blue abyss and the sharp canyon walls plunge into depths that only make rise to giant steel oil platforms. This place is called the Gulf of America, and this, my friends, is a where the monsters live.

As I stared at slack flags on the shrimp boats outlined by a clear blue sky at Venice Marina, I knew it would be a great trip! It was finally calm and Mother Ocean had blessed us with absolutely beautiful conditions.  We were headed to the deep water this weekend to tangle with some big nasty pelagic predators. With full tanks and the chest full of ice, ballyhoo, cigar minnows, and beer it was only a quick run down the mighty Mississippi to our hunting grounds.

We made one more quick live bait stop at a smaller rig about 5 miles out of the mouth to fill up the live-well with some “tuna crack” also known as hardtails.  As always, a little bumping of  the sabiki rigs against the rig leg did the trick on the hard tails. With high spirits and a boat full of premo bait we headed toward blue water. 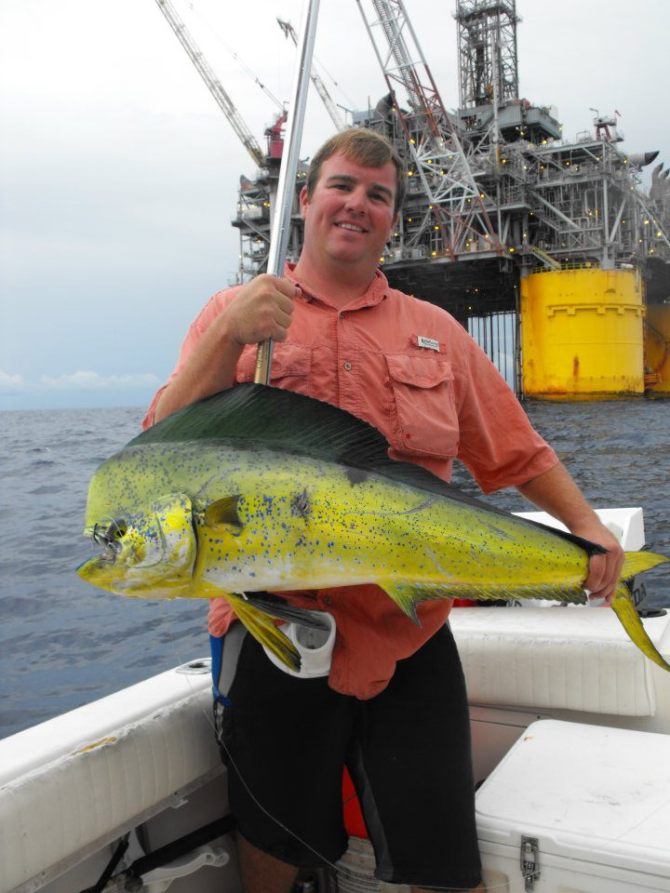 Grant with a nice Dolphin. 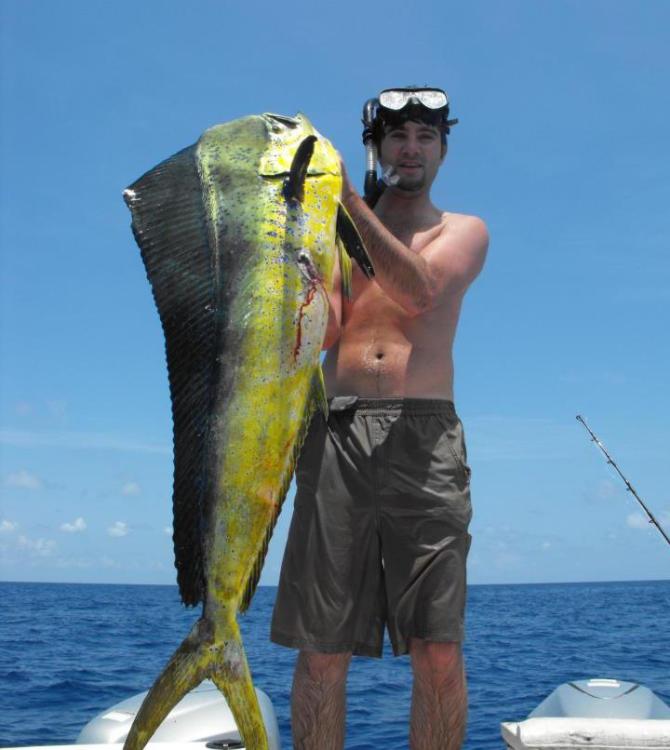 A few more sets of  long period rolling waves and we were greeted with grass building on a color change from hazy green to cobalt blue. Big   nasty   rip; it was on! Out went the islanders rigged with ballyhoo and pink stretch 30’s. As the baits bounced in the wash it didn’t take long for mahi to start flying! Nothing like the explosion of brilliant yellow and emerald to get the blood flowing. Like ravenous golden acrobats some dauphin made for the perfect start to an epic night. 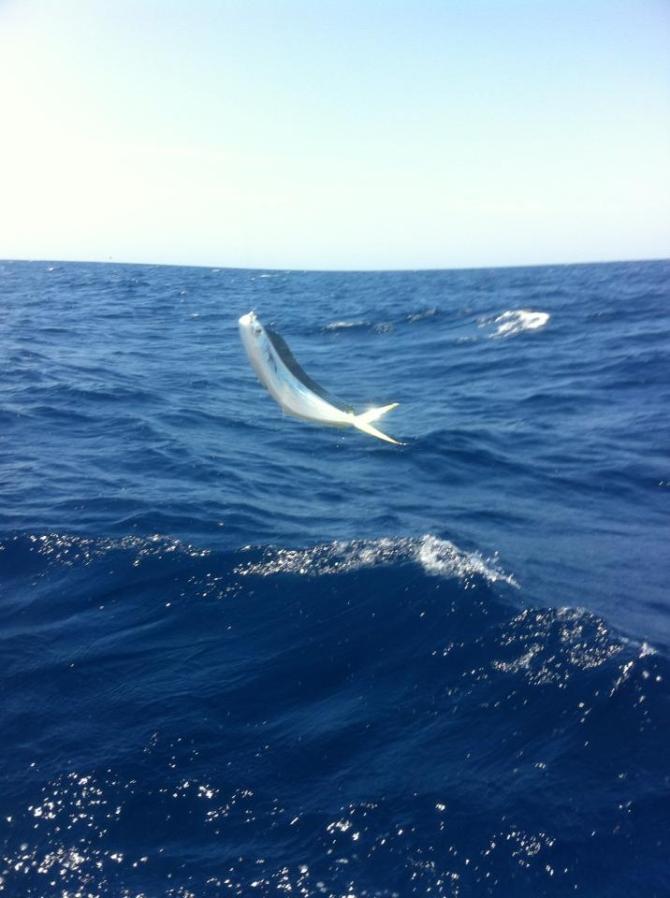 Chicken Dolphin making a run for it.

As tough as it is to leave a productive rip, we were after bigger predators. Fifteen more miles to deeper water we went. As the sun began to set casting a brilliant golden blaze on our starboard shoulder “Mars” came into sight. As we closed in on the oil rig, it’s huge blazing flare and hundreds of lights began to overpower the setting sun.  We found ourselves in the middle of an unforgetable scene.  As swarms of tiny flying fish buzzed across the surf, we witnessed a violent interception that sent a 100+ pound Yellowfin Tuna into a slow somersault through the air.  Here they came like miniature submarines flying out of the water.  A machine built for speed and power, these Yellowfin Tuna are one solid hunk of muscle designed to cut through water and rip through prey. Drift after drift the 100lb mono screamed off the 50 wides. Gaffed and hoisted 1 by 1 big nasty sea monsters crashed onto the deck. As the giants thrashed, the roar of “tuna tail thunder” and warrior cries attracted the attention of the rig crew. Bloody high fives and ear to ear smiles spurred on back wrenching fights into the morning! Several hour long battles and a jam-up crew filled up the man sized fish boxes to the brim! 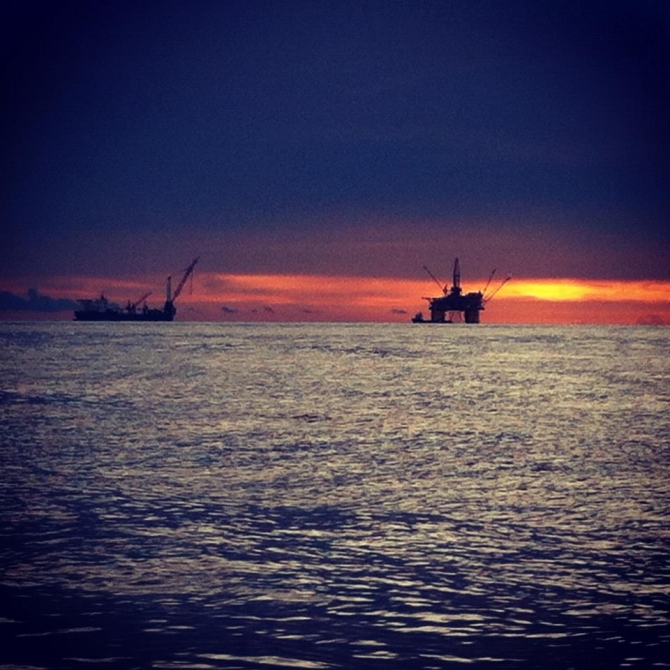 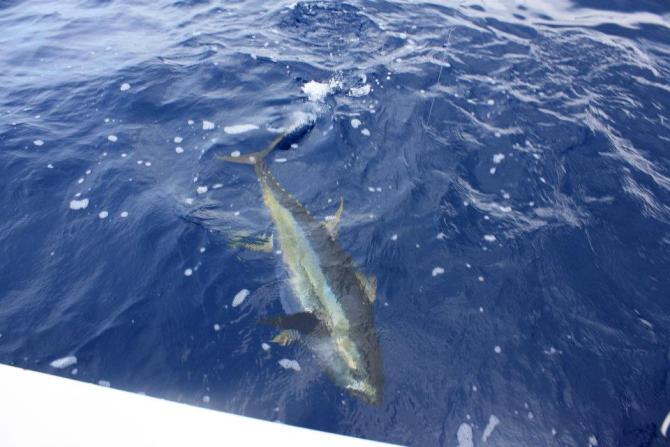 The end of an hour long battle for this good sized Yellowfin Tuna.

As the morning sun burst orange across a beautiful Sunday sky we headed back to the shelf for one last pelagic monster. What do you use a 2 lb hook, 4 lb weight, 400 lb leader, and a hole butterflied black fin tuna to catch?…Warsaw Grouper! A couple broken leaders and one more death match brought the last of our quarry for the day. Bursting to the gills with meat, and ice steadily melting, the 26ft catamaran and her exhausted crew headed back up the river. What a great overnight Legionnaire trip to the canyon! 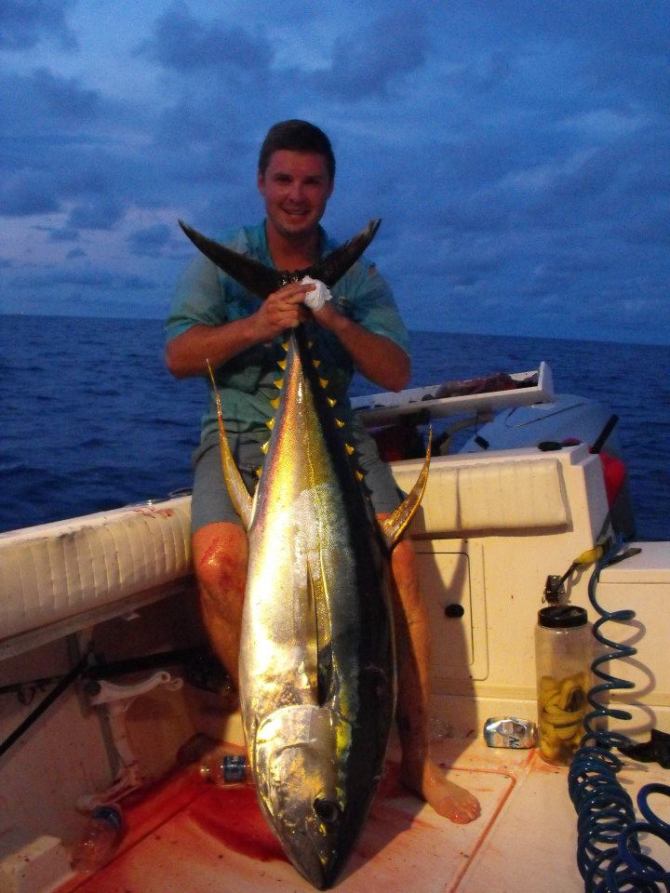 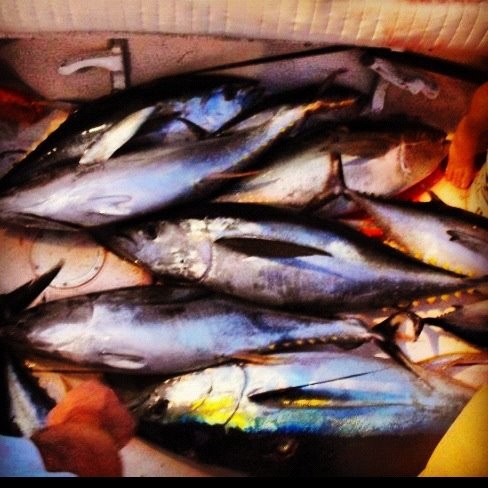 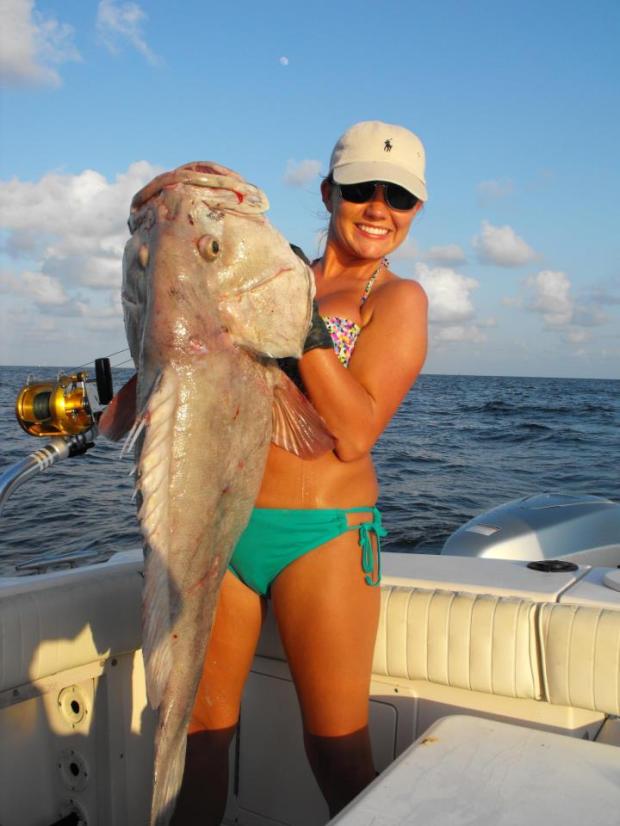